In honor of the 40th anniversary of the Apollo-Soyuz Test Project (ASTP), the first international partnership in space, we spoke with Vance Brand—fighter pilot, flight test engineer, and astronaut—about his experiences as the command module pilot for the ASTP, and about human space flight in general. Below, you'll find a transcript of the interview. 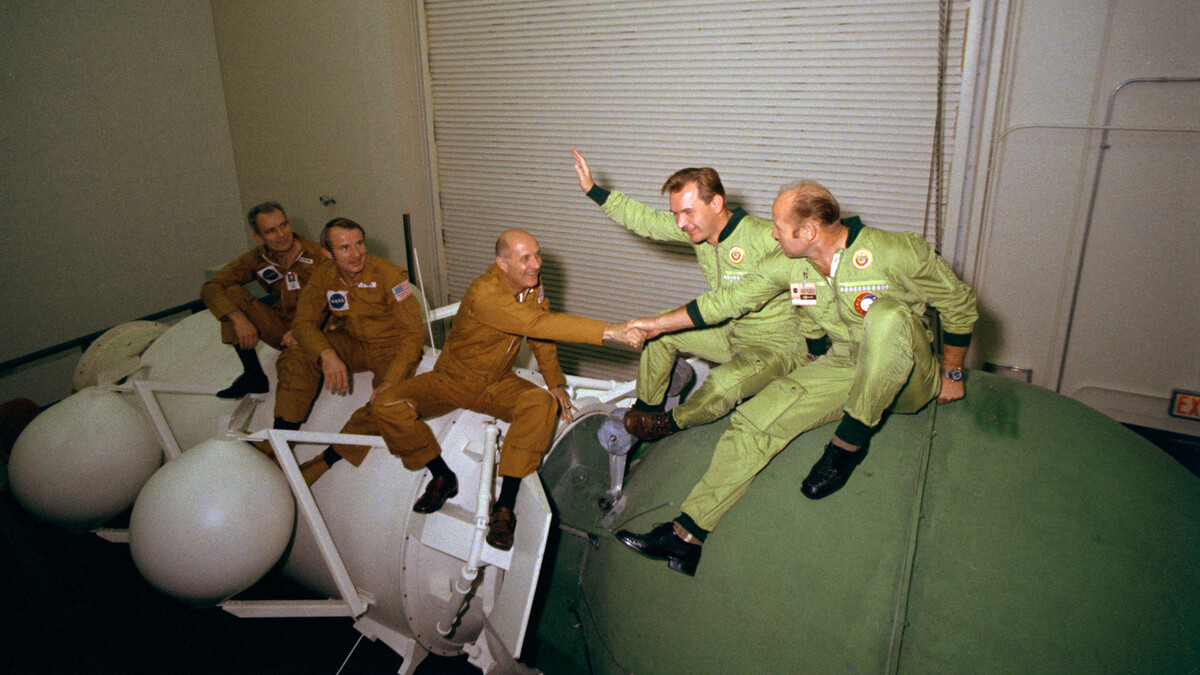 During a break from training, the Apollo-Soyuz crew sits atop a mockup of the spacecraft. Command module pilot Vance Brand is second from the left. 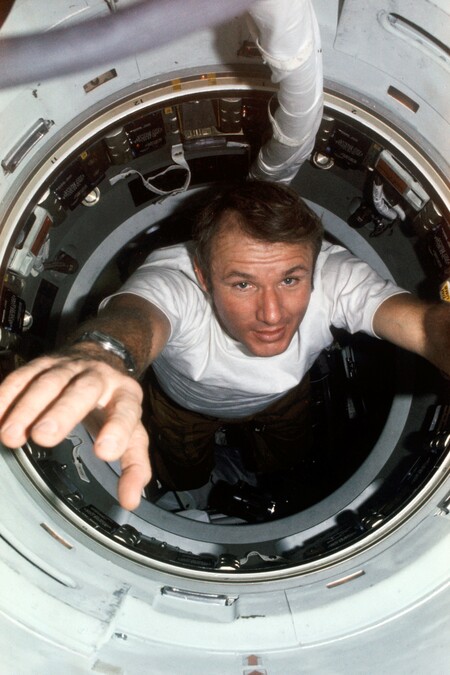 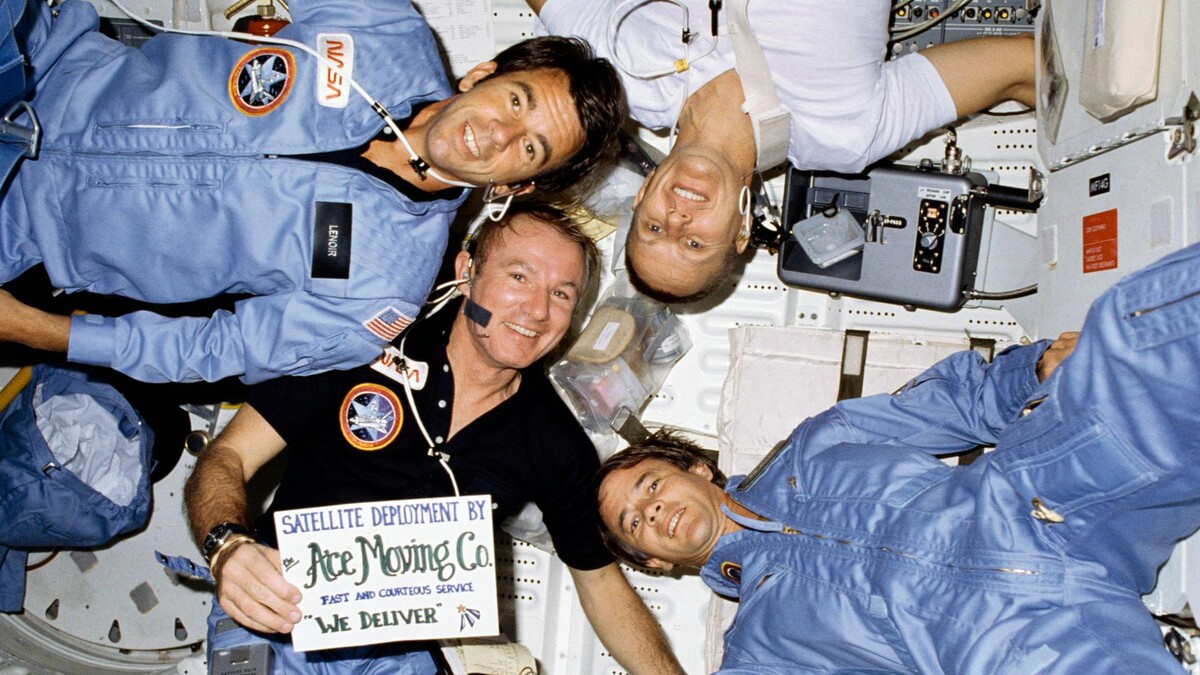 During a break from training, the Apollo-Soyuz crew sits atop a mockup of the spacecraft. Command module pilot Vance Brand is second from the left.

How did it feel to conduct this mission with Russians as partners during the midst of the Cold War?

Did the mission forge lasting relationships between you and your fellow astronauts and cosmonauts?

Yes it did. Ever since the mission, we have run into our fellow crewmen, the cosmonauts, around the world. The last place I saw Aleksey Leonov was in Beijing, China, which was about a year ago. Valeriy Kubasov, who unfortunately passed away last year, and Aleksey used to come to the US frequently, every year or two although I’ve only been to the Soviet Union three times since the mission. I guess I’ve run into them many places around the world.

Well, I don’t know that I was ever fluent—fluency is a big thing, that’s saying a lot when you’re fluent. We all spoke well enough to get by—we were especially good in speaking with them in social situations and in the technical jargon that we used during the mission, like, their word for “docking module” is stickovich modal and so I still remember quite a bit. And even just to stretch my brain a bit these days, I’ll pick up Russian grammar once in a while to try to remember some of the things I used to know. Aleksey always has done well with English. He’s probably more fluent than either Tom or I in the other’s language. Valeriy, he did very well in English, too. So, although I hesitate to use the word fluent, we got along very well with the languages and we still work on them a little bit.

Do you see the Apollo-Soyuz mission as a necessary forerunner to the International Space Station?

It wasn’t necessary, but it turned out to be desirable. It set up a framework of how different countries could work together on cooperative missions. Just to give you an example, after the ground rules were set up for how we would initially work with each other, we had six or seven teams that had participants from each side. Each team had a co-chairman that worked on problems and planning for their part in the mission. For example, we had a flight control team that worked on how you go up in different orbits and rendezvous—that was a big thing that had to be worked out back then. We had a public relations team and a docking system team, and several other teams and each put specialists from each country together—people that worked on the same technical subject. Turned out to be a very good model to use; it achieved its purpose of planning in preparation for the mission.

Why do you think nations can sometimes make collaborations in space happen even when international relationships are strained on Earth?

I think it’s much easier to cooperate technically than it is politically. Aleksey and Valeriy were pilots and engineers and we were the same. It was easy to talk about technical problems. I don’t think we talked about politics or religion. It seemed that we were so far apart in those areas that we didn’t really try to solve any problems in our discussions of those topics.

Many people may not know that you were in space for several days after undocking with the Soyuz. Can you talk about the science component of your mission?

We had about a half dozen joint experiments with the Russians and then we had our own independent experiments after the time we undocked. The total number of experiments was somewhere around 30 and they were in different areas. For example, going to the joint experiments, we had one with the Russians where they looked at the migration of bacteria from one spacecraft to the other—in other words, to trace where bacteria from America went to and how quickly into the Soyuz spacecraft and bacteria from Kazakhstan migrated across. And we had a metal experiment done by Tom and Alexi to melt metals in weightlessness that had several components and then let them solidify to see if you could get a superior material out of that. So as far as independent experiments done on our side, we had medical, astronomy, physics and several other categories of experiments. On the biomed side, we had electrophoresis, a separation technique done in weightlessness and one that was physics-related. We tried to measure the density of nitrogen and oxygen atoms at our orbital altitude. Granted, you don’t have air up there [in space] but there are atoms. As a matter of fact, when I was flying the shuttle, we used to see a glow from the ship because atoms in this very tenuous area of space were ramming into the tail of the shuttle and creating a glow. We had quite a large experiment program on Apollo-Soyuz.

When landing, you had some trouble as toxic nitrogen tetroxide was sucked into your cabin. Were you ever scared during your mission, then or otherwise?

Well, I’ll start out with otherwise. Otherwise, no. Although everything was different than we had planned by some degree and there was some difference actually doing activities during the mission and seeing how they turned out after planning in simulators so there were minor surprises, we sort of knew what to expect and we didn’t have any disastrous things happen, so I wasn’t frightened. As far as the gassing incident, breathing nitrogen tetroxide, that all started when we were below 50,000 feet on the way home and it was over so quickly—we all just dealt with it, throwing switches and whatever was required to try to better our situation, so I didn’t have time to get scared. It was only afterwards that I thought, "That could have ended badly."

On this 40th anniversary of the Apollo-Soyuz mission, what are your thoughts on the current US space program?

In the forty years, we’ve made amazing progress. The world has made amazing progress as represented by the International Space Station. In the United States involved in earth-orbital activities, we have [the] chance of making flying into space cheaper and eventually easier, and maybe we can get more and more people up there, I think. Probably about 500 people from Earth have gone into space so far. More people would like to do it and deserve to have a chance. Deep space is still such a challenge. The guy off the street won’t be going into space for a while yet. It will require support and funding from the federal government and other governments around the world. Commercialization won’t reach very far into deep space. It may go in your lifetime as far as the moon, I don’t know. A lot of questions have to be answered about the moon. Are we going to turn it into a giant national park, or are we going to mine it, or how are we going to use it? If we decide to mine it or parts of it, or establish space bases up there for commercial purposes, it’s going to take some thinking ahead of time to make sure we do it correctly. Because the people who’ve been up to the moon and walked around on it tell us it’s a beautiful place, easily disturbed, so I picture a lot of discussion on that in the future.